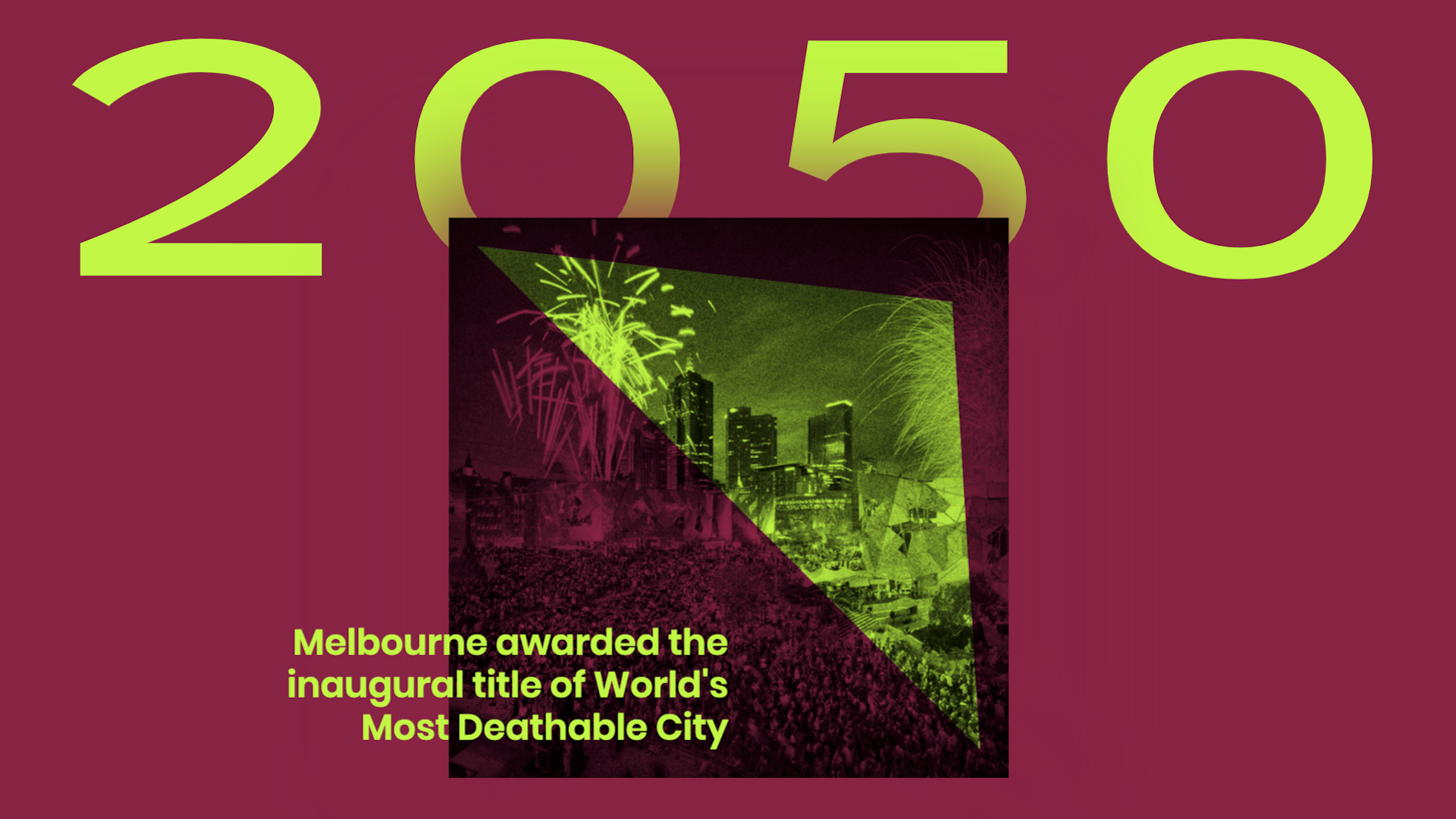 What does it take to make a Deathable City?

Melbourne is no longer the World's Most Liveable City. After a sustained loss of the title two years in a row to Vienna it may be time the city started to chase a new title that could be within reach in the next 3 decades: the World's Most Deathable City.

The stigma that surrounds talking about death is profound. It's a topic that can make people feel extremely uncomfortable and that many dismiss as being morbid and off-putting, but it is also a part of being human and can't be avoided. In order to start conversations about this part of everyone's life we are launching Deathable Cities, a website that projects the steps it would take for Melbourne to become the World's Most Deathable City by 2050.

Why are you so obsessed with death?

We are currently facing an ageing population and increased rates of mortality which will put an immense strain on cities as we reach what demographers call 'peak death' — the point at which the number of deaths proportional to the population hits its highest point, due to the Baby Boomer generation reaching the average lifespan. It is vital that we plan for this change, and using a projection tool such as we used for Deathable Cities is one way to make people begin envisioning what it will take to prepare for this.

This is not our first foray into the subject. Since 2017 Portable has been exploring the idea of death and ageing through the lens of user experience. Our team has conducted extensive research with subject-matter experts including palliative care specialists, aged-care providers, funeral directors, end-of-life doulas, public servants, as well as people alive and well, widowers, and people living with a terminal diagnosis. We took our findings from this research and created the Future of Death and Ageing report, but our work didn't finish there.

While digging into how to get people to better engage with the experience of death and ageing, we conducted workshops during Melbourne Knowledge Week that asked people to help us co-design a vision of Melbourne as the World's Most Deathable City by 2050. This involved imagining the steps that would allow Melburnians to become more death-literate, and make the city become renowned as the perfect place for a gentle departure.

The insights provided by participants lead to our creation of Deathable Cities, a projection of the steps envisioned by our designers and participants in an easily engageable format. Although theoretical, we believe this tool is a conversation starter which could lead to significant change through making death a more public topic rather than being hushed up and left unconsidered.

If you're intrigued by our deep-dive process into subjects like death and ageing, you should take a look at our other reports.

We recently completed the Principles of Data Driven Design which looks at the opportunities for using data insights to design products and getting around the barriers of data driven design. We also have looked into our reliance on infrastructure and how designers can help create smarter and more sustainable infrastructure in The New Infrastructure, and the transformation of work and helping employers prepare for the challenges involved with imagining future changes in Redesigning Work.